Subscribe to my newsletter and never miss my upcoming articles

Listen to this article

Simply put your application uses structures and classes to build UI, business logic, and add functionality using structs and classes. So it will make sense for developers to understand how Swift handles memory allocation to a structure and a class.

Unlike other programming languages, Swift doesn’t require you to create separate interface and implementation files for custom structures and classes. In Swift, you define a structure or class in a single file, and the external interface to that class or structure is automatically made available for other code to use.

Structures and classes in Swift have many things in common.

Example of a Structure in Swift :

Example of a Class in swift :

Give types UpperCamelCase names (such as SomeStructure and SomeClass) to match the capitalization of swift standard types such as String, Int, and Bool, etc.

Classes have additional capabilities that structures don’t have:

1.Inheritance enables a class to inherit the characteristics of another.

2.Type casting enables you to check and interpret the type of a class instance at runtime.

3.Deinitializers enable an instance of a class to free up any resources it has assigned. It performs any custom cleanup just before an instance of that class is deallocated.

4.Reference counting allows more than one reference to a class instance.

5.If you do not assign values to your variables and constants in class, you need to explicitly initialize the members using the init( ) method.

Swift also allows you to assign default values to the variable definition and by assigning default values, you can avoid the init() method of its members in the class or struct definition.

In all my Swift-related posts I tried to explain value type and reference type vaguely. So I decided to dig a little deeper and tried explaining how RAM works in IOS devices. I cannot emphasize enough how important this concept is to become better at developing robust applications using Swift.

Before we get into differences, let's discuss an important concept called Memory.

Although Swift intelligently uses ARC for memory management, It is crucial for developers to know the concept of Memory and how is it used by Swift to assign to its types.

Your devices have a crucial component called RAM (Random Access Memory), which is used to store working data when you are using the device.

RAM is your memory. It's referred to as a volatile medium because it handles active processes and not static ones. For example, iPhone RAM handles processes like apps, a browser with 20+ tabs open while listening to the music app or your favorite podcast app, then open a text from a friend on some other messaging app when you receive a notification, etc so it's a volatile memory and changes dynamically.

If you haven't used an app on your device for a while, iOS pretty quickly kills any background processes in RAM so that performance doesn't deteriorate unless you have background app refresh on for that application.

Consider RAM as a workspace the device uses to get work done.

RAM/memory divides its space into discrete chunks (multiple 1-byte spaces), and each chunk has a unique memory address.

In Swift, value types are assigned to the stack during compile-time and the heap memory is allocated to reference types during the application runtime. This is one reason why Swift compiler expects you to initialize all the member types of a class or a structure.

Image - address space of a single thread in a process. 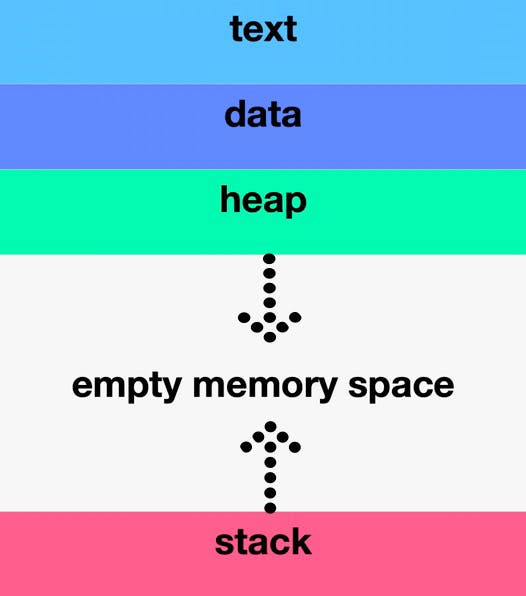 The memory of the stack and heap extend towards each other as shown in the image above.

The stack and heap from memory are allocated similarly based on how these data structures work.

Memory address usually is a hexadecimal string (eg: 0x12345) in most devices.

When the CPU needs to get data from a certain chunk of memory, it will reference the memory address.

This concept is called a Pointer in Computer Science.

When we declare variables in Swift/Objective-C, the operating system will allocate a chunk(chunks) of memory (with memory address) to store them.

Stack Allocation is a simple and fast way to allocate/deallocate memory. It impacts a lot when it comes to performance.

Example of a maxHeap data structure. 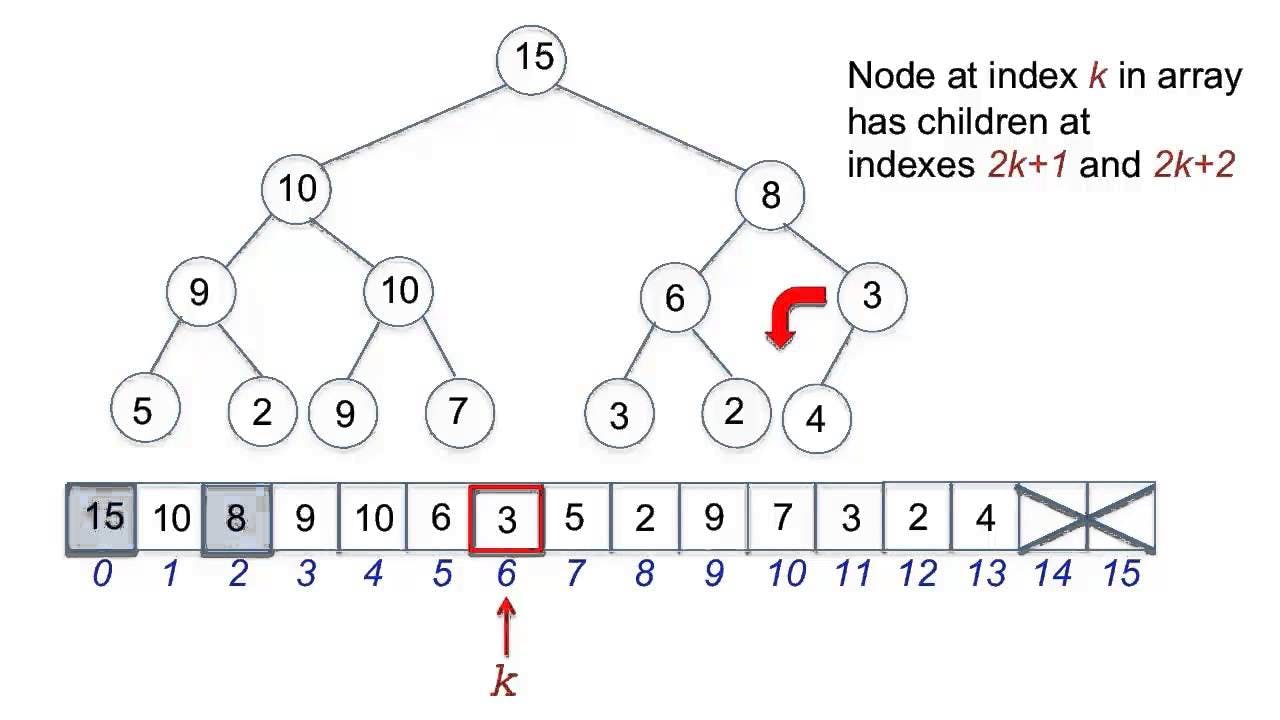 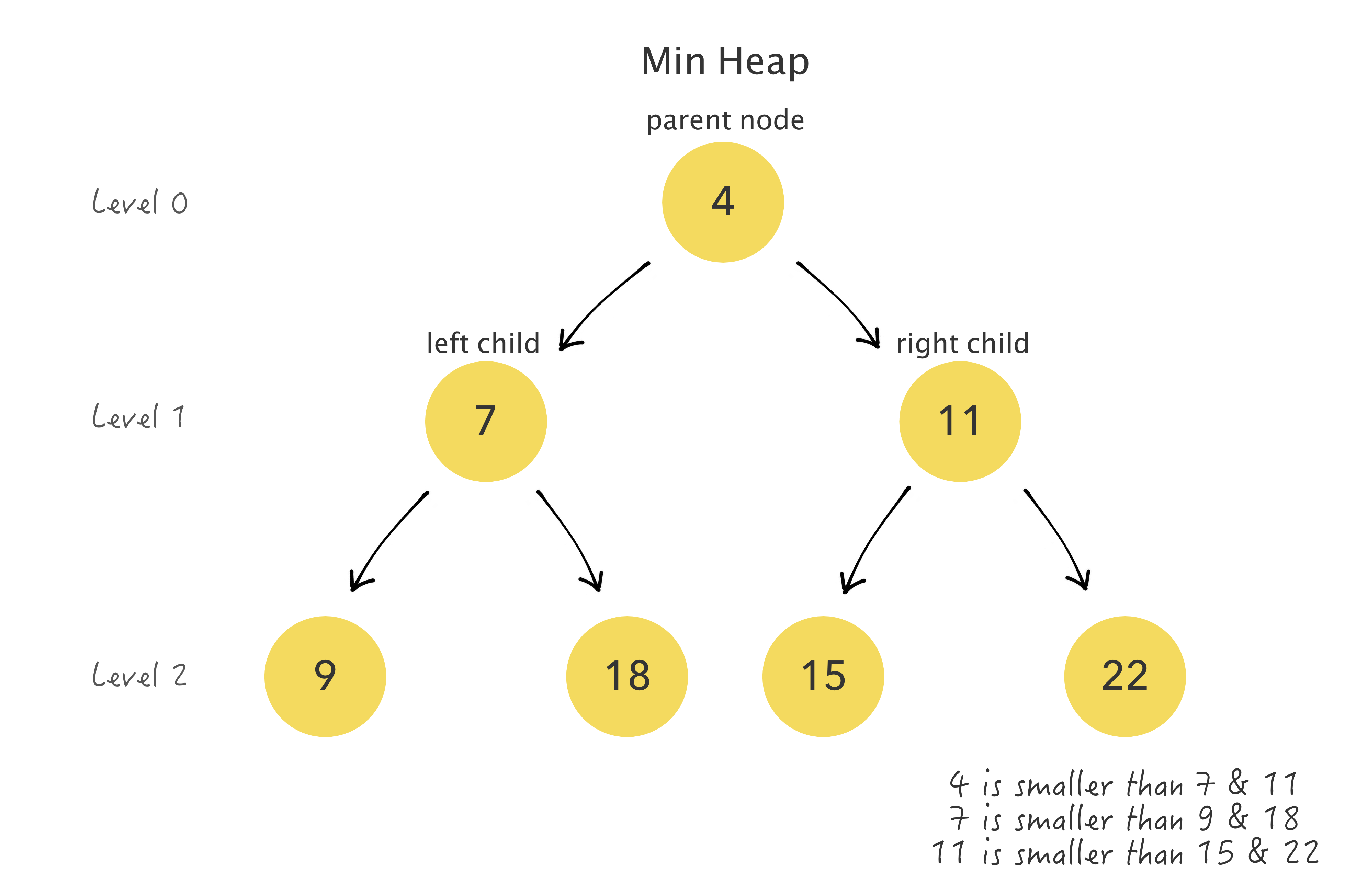 In a multi-threaded situation, each thread will have its own completely independent stack but they will share the heap.

Stack is thread-specific and Heap is application-specific. The stack is important to consider in exception handling and thread executions.

Structures, Arrays, Sets, Dictionaries, Enums, Tuples, in fact, every type except Class, Function, and Closure is a value type and Swift value types are allocated memory on the stack with some exceptions of course.

Under the hood all the value types in Swift are implemented as structures.

Reference types like Class, Function, and Closure are allocated memory on the heap. In some cases, they are assigned to the stack as well.

I will discuss these exceptions in my next post on ARC.

Note: Compiler does a lot of optimization in different phases. Sometimes we don’t know whether we are actually using a value type or a reference type.

The performance differences between the two are expressive and can heavily favor one or another depending on the contents of your object, especially when dealing with value types.

Basics of ARC in Swift.

ARC is a compile-time feature. The compiler inserts the necessary retain/release calls at compile-time, but those calls are executed at runtime, just like any other code.

Memory management is the way of controlling memory allocation and making it free/available for other processes to use. Automatic Reference Counting is the mechanism used for it in iOS.

We will discuss ARC more in-depth in my next post.

When you pass a value type to a variable, a copy of the existing instance is made. The new instance will have its own memory in the stack.

They are passed around using pointers, a pointer to the heap memory location where the class is located.

3.Structs have no Inheritance.

You cannot inherit the features from other structures or classes but you can conform to a protocol.

4.Classes in Swift have single inheritance.

5.Structures have a memberwise initializer that initializes all the stored properties in a struct.

6.A structure instance can only be mutated if it’s defined as a variable and it will only update the referencing instance.

When a value type is declared as "let" the contents of it cannot be modified.

7.Value types do not need dynamic memory allocation or reference counting, both of which are expensive operations. At the same time methods on value types are dispatched statically.

This gives a huge advantage in favor of value types over reference types in terms of performance.

Now what? Should I use a Structure or a Class for my requirement?

Swift provides a number of features that make structs better than classes in many circumstances.

Structs are preferable if they are relatively small and easy to pass a copy because copying is way safer than having multiple references to the same instance as happens with classes. This is especially important when passing around a variable to many classes and/or in a multithreaded environment. If you can always send a copy of your variable to other places, you never have to worry about that other place changing the value of your variable underneath you.

With structs, there is much less need to worry about memory leaks or multiple threads racing to access/modify a single instance of a variable. (For the more technically minded, the exception to that is when capturing a struct inside a closure because then it is actually capturing a reference to the instance unless you explicitly mark it to be copied).

Classes can also become bloated because a class can only inherit from a single superclass. That encourages us to create huge superclasses that encompass many different abilities that are loosely related. Using protocols, especially with protocol extensions where you can provide implementations to protocols, allows you to eliminate the need for classes to achieve this sort of behavior.

As a general guideline(Apple Docs), consider creating a structure when one or more of these conditions apply :

In all other cases, define a class, and create instances of that class to be managed and passed by reference. In practice, this means that most custom data constructs should be classes, not structures.

You should consider using a class when:

Ideally, you need to understand the real-world implication of value types vs. reference types and then you can make a decision about when to use structs or classes. It takes practice and I am still learning the use of structs and classes in swift.

Try to go for a struct by default. Structs make your code easier to reason about and make it easier to work in multithreaded environments which we often have while developing in Swift.

Also, if you do decide to go for a class, consider marking it as final and help the compiler by telling it that there are no other classes that inherit from your defined class.

Hopefully, in time you’ll be able to decide about choosing between a class or a struct. It’s definitely not always easy and possible to go for a struct but it should be considered the default when programming in Swift. Once you’ll use structs more often I’m pretty sure you’ll get used to working with them.

Note: Every time you run these examples on playground or run your application in xcode a new memory address is alocated from the available memory.